This post addresses the common dilemma in a grammarian’s life: you’re supposed to stick to the RGL API, but sometime’s it’s not enough. Reasons include, but are not limited to

Of course, the best practice is that you fix or extend the RG, or change the abstract syntax of your application grammar. Also remember to check Extend to see if the function you want isn’t there already. But in practice, we grammarians are writing dubious hacks anyway, so might as well do it better.

So you have an application grammar with the following function:

You’ve written a linearisation for your application grammar in a language you don’t know (we’ll just call it L from now on), using the API function mkQCl:

You show the application-specific sentence, say, where is the money to your informant, and they tell you that it’s wrong: money should be in accusative.

Unfortunately, your second-in-command shoots the informant in frustration, and you don’t have access to any other L speakers in reasonable distance. What do you do?

The ideal solution is, of course, to fix all the relevant functions in QuestionL.gf, and if so needed, update the categories of IP and NP.

But you don’t speak L, and your informant didn’t leave enough evidence: does the accusative happen with all interrogative pronouns? Do the properties of the NP or the rest of the clause make a difference? After all, you have only witnessed that with the IP where, a single NP which is uncountable and definite takes an accusative case, when the sentence is active, positive and in the present tense.

Given these circumstances, it’s perfectly understandable that you don’t feel comfortable touching QuestionL. Just remember to open an issue where you describe the problem, so that someone can fix it later.

So you’ve created an issue, nobody has volunteered to fix it, and you need to urgently interrogate more L speakers.

You’ve peeked into the resource grammar of L, and you know that NP has an s field which is a table of Case => Str. So you go for this quick and dirty solution:

You’re extending the original np argument, so it’s not the most terrible solution imaginable (elaborated later in this post), but you’re still leaving your code vulnerable to any potential changes in the s field. If that happens, your grammar stops working and you sure won’t find your money.

So, let’s look at WhereIsThing again.

You have been using the IP -> NP -> QCl instance of mkQCl, but could you use some other API function instead? Look at the options in the RGL synopsis: 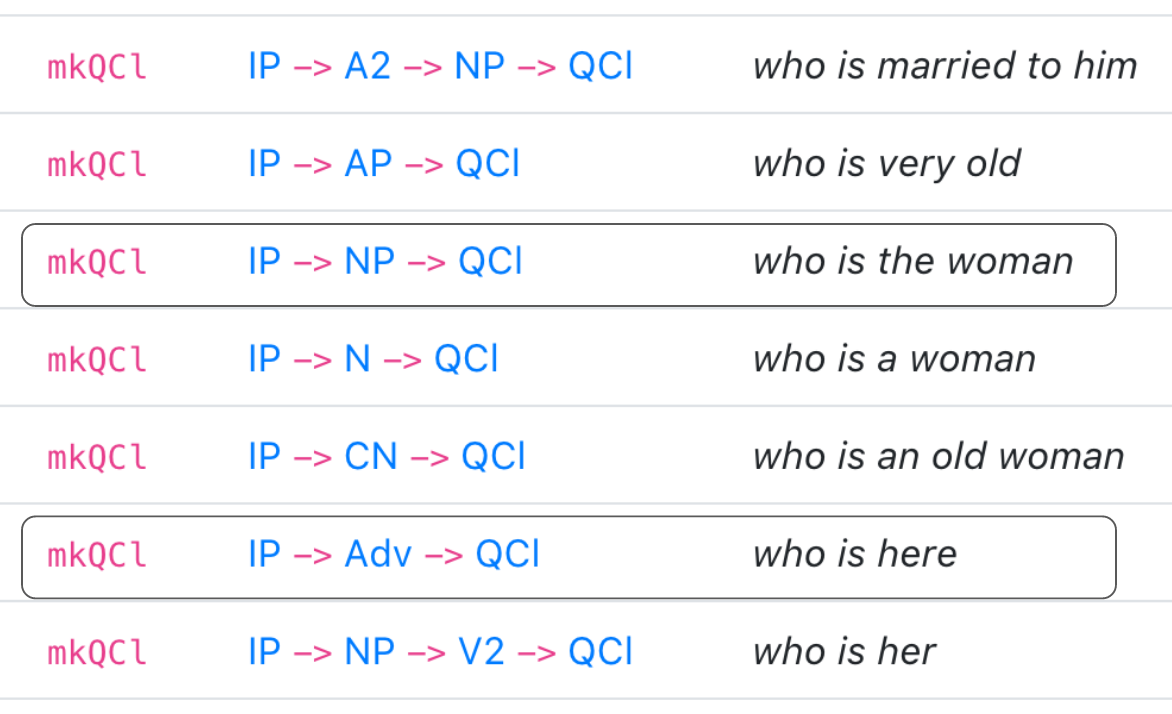 Now the only thing you need is a Prep that only forces out the accusative case but doesn’t add a string. If there is not one already, maybe you could add such a instance for mkPrep to the ParadigmsL module. That’s not a huge commitment like changing the entire QuestionL, and you get to enjoy the security that your code is safe for future internal changes in the RG for L.

Despite our best efforts, it’s not always possible to find a creative solution that uses only the API . So here are two techniques I use all the time. Just a couple of disclaimers before we get started:

So, here are two techniques I use all the time.

Say you want to construct your own NP from a single Str argument. Let’s see first what is the lincat of NP in CatEng:

It’s unsafe to write an oper like this manually in an application grammar:

But we can make it just tiny bit less dangerous by a simple trick: extend some known stable NP. You can find a bunch of them in the synopsis, they work for every language!

So let’s say that we want our NP to be third person singular. Then we can extend it_NP from the API, and only change manually the s field.

Even though it_NP is available for all the RGL languages, the part after ** is still specific to English. For any other language L you want to do this for, you need to check CatL to see what is the lincat of NP in L. If NP in L has an s field with a table Foo => Bar => Baz => Str, then you need to write this instead:

Record extension guards you against changes in the rest of the category you are hacking, but you’re still vulnerable for changes in the field you modify manually. For instance, someone notices that most combinations of Foo and Bar don’t happen, and merges them into just one parameter that spells out the combinations explicitly, then \\_,_,_ => str is wrong and should be changed for \\_,_ => str.

If you want to combine s from one NP and agreement from another, then you can do it perfectly safely. Here’s a concrete use case: you want to parse and linearise <number> is <NP>, e.g. “ten is the best grade”. If you use mkNP (mkDet num), you will get “ten are the best grade”. So you need to force singular agreement into the NP constructed from the number.

As long as all the languages in your grammar have a field called s in NP, this is perfectly safe and works for all languages:

Note that it would be much less safe the following way:

It’s unsafe, because unlike s field, we have no guarantee that all languages have a field called agr.

Use opers that are indispensable in the RG

For easy categories like NP, you’re likely to find such functions already. For English, you have a mkNP in ResEng and MakeStructuralEng. Important for the 3rd point, these functions are used in the RG too.

Technically, the 3rd point is not 100 % crucial: even if ResEng.mkNP wasn’t used anywhere, changing the lincat of NP without changing ResEng.mkNP would still result in a compilation error. But there is some danger though: maybe the grammarian who changes the English NP notices that this function is not used anywhere, and decides to remove it altogether, and then your application grammar which relies on ResEng.mkNP breaks.

Let’s just look at a bunch of concrete examples.

This is from the Arabic RG: a default NP with an empty string for s and the most unmarked agreement.

This is used in tons of places, where the modifications in the s and a fields require some more complex computation.

Note that this is a practical design pattern in general, even if you’re not planning on using anything outside the API in application grammars. When you change a lincat in the RG, then you need to change only 1 oper instead of changing 10 lins.

When I discussed this with Aarne, he suggested to use not an empty string for the default C, but rather something that is obviously meant to be replaced. So here’s an alternative implementation:

Then you could find out if something is wrong by doing ma "HELPIAMTRAPPEDINAGRAMMAR" in the GF shell, and if you get a hit, you’ll see which function is not overriding the default linearisation.

We continue with the Arabic RG. There are also derived opers in ResAra which use emptyNP, such as indeclNP and agrNP:

These are, in turn, used elsewhere, e.g. in IdiomAra:

Using indeclNP in your application is safer than using emptyNP ** {foo = …}, because with indeclNP you make zero assumptions on what is inside an NP. (Well, except that there is a string in some form.) It’s hard to come up with a reason why a future grammarian would want to eliminate these functions from the RG, because they also make the resource grammarian’s life easier, by having to change things in fewer places.

What if you don’t want to make a new C from scratch but modify an existing one? Here’s my favourite way of handling it.

In contrast, none of these is used elsewhere in the Arabic RG. I’m just relying on my comments to convey to future Arabic resource grammarians why they should be kept.

If you noticed, the first step was “Get intimate with the resource grammar for L”. This might seem like a daunting task, but you still don’t need to learn L the language to look at its resource grammar. You might be only interested in modifying one category in your application, and then it’s enough to find (or create!) defaultC, makeC and modifyC for that one category. Shocking news really, in order to use low-level hacks and bypass the API, you need to know the RG of the language beyond the API.

If you do explore the RG and introduce these functions, don’t be shy to replace repetitive code you might find in that resource grammar itself. For instance, here I have added mkOrd into ResJpn and use it in three functions elsewhere. I didn’t do anything else to learn Japanese, I just copied and pasted the code that was previously repeated in 2 places and called it mkOrd. In that case, my motivation was to fill SymbolJpn and that was just a byproduct, because I didn’t want to copy and paste the code for the third time. But if I’d want to use something like that in my application, having an oper mkOrd is way better than writing pred = \\st,t,p => symb.s ++ "番目" ++ mkCopula.s ! st ! t ! p by hand.

How to make sure you don’t change the behaviour of a language you don’t know? You can use gftest’s -o feature to make sure you didn’t break things. It’s saved me from serious errors so many times, I might just write a blog post to list the most atrocious stupidities I was about to commit, if gftest hadn’t caught them for me.

Hot take: defaultC and makeC style opers are great and make everyone’s life better, resource and application grammarians alike. forceFeature can be a sign that someone somewhere could’ve designed things better, but it’s way better than having to stand your grammar outputting things you don’t want it to.

Out of the examples, forcePerson is pretty fine and there are legit use cases. Say that you need to express a concept like $AGR faints as it blacks out on $AGR. All you need is to have a possibility for non-nominative subject case in V, and a possibility to force all inflection forms into 3rd person singular. If you expect vanilla RGL to translate “I like GF” as “me gusta GF” (too bad it doesn’t, because gustar actually agrees with the object and the inflection tables are just one-dimensional), then using forcePerson is not very controversial. We could totally do it for intransitive verbs in the Spanish RG already.

Why is deviating subject case and incomplete paradigm okay, but remove $AGR’s clothes bad? Well, consider again that we are incorporating a) an inflecting noun and b) a inflecting pronoun into a V. As it happens in Finnish, and certainly similar things happen in other languages, the noun gets a different case in active sentences vs. passive sentences, and in negative sentences vs. positive sentences. As it also happens, some of these things are expressed periphrastically and thus built at the Cl level, so we can’t ensure the right case for clothes just by inserting it in the verb’s inflection table. So hacking VP/Cl level stuff into V will never be supported in the common RGL API, because that must work for all languages.

If V and Cl have identical inflection tables in your language, then it’s safe to add anything you like, and it won’t introduce ungrammatical sentences. If you know you’re working on languages with very little morphology, honestly, do whatever you want. If you find that you’re using such hacks all the time and it’s become a standard practice, you could even add them to ParadigmsL2, because Paradigms are totally language-specific; then you need to import fewer modules. I support anything that makes grammarians’ lives easier and doesn’t produce horribly wrong sentences. Just don’t expect that all languages can copy that design, and be prepared to change lincats if you ever add more languages to your application.