The first half of this post was originally included in GF gotchas. If you’ve read the original post, feel free to jump directly to the second half!

You may have heard that GF is dependently typed, and wondered what that means. (Or maybe this is the first time, and now you sure are wondering what that means!) Perhaps you have looked at Coordination.gf and gotten confused about the weird functions that take types as arguments.

Types are of type Type

Params are of type PType

PType is the same but for params. Like this:

The values Nom, Acc etc. are of type Case, and Case is of type PType. I could’ve written the same thing like this:

Why is this useful for anything? Well, in prelude/Coordination.gf, we have constructors that take parameters (i.e. PTypes) as an argument, and return a table with those parameters on the left-hand side. Here’s an example with one parameter:

So this function takes a parameter (PType) and returns another type (Type). Let’s look at a concrete example:

That wasn’t so much shorter—why do this? I think parts of it have to do with how much it shortens the Conjunction modules of different RGL languages. In the average case, you can pretty much copy and paste the English approach, just adjust the arity of the opers (e.g. call twoTable3 instead of twoTable2) and the parameters itself.

Here’s DiffRomance, which just tells that there is a parameter CopulaType, and two aliases for whatever concrete values they will get in each Romance language. These aliases called serCopula and estarCopula. Furthermore, there is a function selectCopula, which takes a CopulaType and returns an appropriate Verb.

Spanish has two copulas so DiffSpa implements CopulaType as a Boolean:

Finally, Portuguese has at least 3 copulas, and DiffPor implements this parameter as a 3-valued parameter:

Types can be arguments to functions

Now that we’re granting basic human rights to types, look at this piece of code:

If the if_then_else bit looks strange, we can sugar it into the following:

So what is happening? In GF, there is no if … then … else keyword, just a function if_then_else that takes 4 arguments, of which the first one is a type. This is how it’s defined in the GF prelude:

In our AdjCN example, we give the following 4 arguments:

Why do we need the first argument? I don’t know the details, but as far as I’ve understood, the cool expressive power that comes from dependent types comes with a tradeoff: the compiler can’t just guess things anymore. (In type theorist lingo, dependent types don’t mix well with polymorphism.) Like in this case, we gave if_then_else two strings as arguments, but we still needed to give the type Str as the first argument.

The “types can be of type” thing, as well as “annotate the hell out of everything because the type checker seems like a clueless idiot” thing is just a prerequisite for doing cool stuff with dependent types.

Because this post is about GF, my example of “cool stuff” will be about “make grammars produce sentences that make sense”2. If you find this example too contrived but are still curious about dependent types, go and read something else!

Note: the features I’m introducing in the rest of the post are not available, if you want to use the GF grammar from e.g. Python. See this thread for more information.

My supervisor tells me that research topics should emerge from a desire to solve a problem, not from a desire to use a particular technology. (Or at least one should give the former reason in the paper.) So let’s start with a problem that we will solve with dependent types.

As you know, the GF resource grammar is purely syntactic and overgenerates a lot. Application grammars often use more elaborate types in the abstract syntax, such that “Monet painted flowers” is a valid sentence but “flowers painted Monet” isn’t. We can write such a grammar easily with just any old boring types, like this:

The distinctions such as separating humans from objects are broad enough to have their own categories. But sometimes we need even finer distinctions, which may only apply to certain constructions.

For example, in the domain of museum object descriptions, the people appearing in the texts are likely to be either artists or subjects. As a concrete motivation for fine-tuning the semantic distinctions in a grammar, we examined the corpus provided by Göteborgs Stadsmuseum, and found out that the descriptions artwork of (depicting) and artwork by (authored) are often expressed with the same construction, using the Swedish preposition av for both meanings. In other words, ett porträtt av Mona Lisa gets two parses: one where Mona Lisa is the the subject and one where she is the painter.

As a solution to ambiguity of the roles, we could split the abstract syntax category Person into two categories, Painter and Subject, and define the functions authoredBy and depicting so that they accept only one as their argument. This way, even if the constructions are identical, the type of the argument disambiguates the expression.

However, separating painters and subjects will lead into problems. There are many portraits depicting painters, but the grammar would not allow a painter to be in any other role than an author–a portrait of Leonardo da Vinci would be considered a syntax error and not be parsed. Furthermore, if there are functions common to all people, such as being born or dying, each of them would have to be defined separately for painters and subjects. There are some actions that can only be done to one of them, but since the majority of the actions are the same, it feels redundant to put them in different categories.

As a solution to too rigid grammar, we can define dependent types. In addition to the simple type Person, we add dependent type constructors Painter and Subject, which take some Person as argument, producing types such as Painter Leonardo and Subject Mona_Lisa. They provide a semantic layer on top of the syntactic level, more flexible and easier to modify.

The declarations of portrait, Mona Lisa and Leonardo da Vinci haven’t changed. But now, let us look at the functions authoredBy and depicting. Like before, they take a Painting and a Person as their arguments and construct a new value of type Painting. The notation (p : Person) is a way to bind the argument to a variable, so that we can refer to the same argument later (just like the first (A : Type) in if_then_else).

The third argument of authoredBy and depicting is of the dependent type Painter p or Subject p, in which the variable p must be the Person given as the second argument. In our concrete case, the only options are Subject Mona_Lisa and Painter Leonardo.

We define these terms, called Mona_Lisa_Subject (of type Subject Mona_Lisa) and Leonardo_Painter (of type Painter Leonardo) at the end of the grammar. They are called proof objects, and their purpose is to control which combinations of persons and roles are valid. Technically they are (argumentless) functions just like any other under the fun title, but they are not linearised in the concrete syntax. They only exist to guide the GF compiler that something is, or isn’t, a valid tree.

Adding dependent types does not rule out anything previously done. The basic type of all people is still Person. In addition, Leonardo da Vinci belongs to the categories Painter Person and Subject Person, and Mona Lisa to Subject Person. If some language treats the owner of a portrait in a way that results in ambiguity, it is easy to add a new type, Collector Person, and write a proof object for each person who is a collector.

So far our concern has been to handle the ambiguity of natural language, in this case the same preposition being used for author and subject. But how about the bigger goal, creating sentences that make sense?

Do you see the problem? With our fancy grammar, we could still claim that any painting is painted, depicts or is a self-portrait of Leonardo. The function selfportrait only checks whether the potential author has ever been a subject, nothing about the painting itself.

To ensure that the painting really is a self-portrait, we need to fine-tune our approach a bit. Dependent types can contain several terms: for all requirements of depicting, we need a type constructor that takes both Person and Painting, and produces a proof object of type “yes, this $painting depicts this $person”. For authoredBy it’s the same business, except the proof object says “yes, this $painting was authored by this $person”.

And what kind of proof object(s) does selfportrait need? Think a moment and then look at the code below.

And now we can generate sentences that are a) not ambiguous, and b) describe the reality! To be honest, at this point the grammar is not so nice to read nor write anymore, but there’s always tradeoffs in life.

In fact, the SUMO ontology has been translated into GF (Enache, 2010). Instead of fine semantic distinctions, dependent types can be used to represent the whole inheritance hierarchy of an ontology. I’m not going to delve into this particular work any further, but here’s the contents–if anything in the contents looks interesting, go and read the thesis and check out the code! 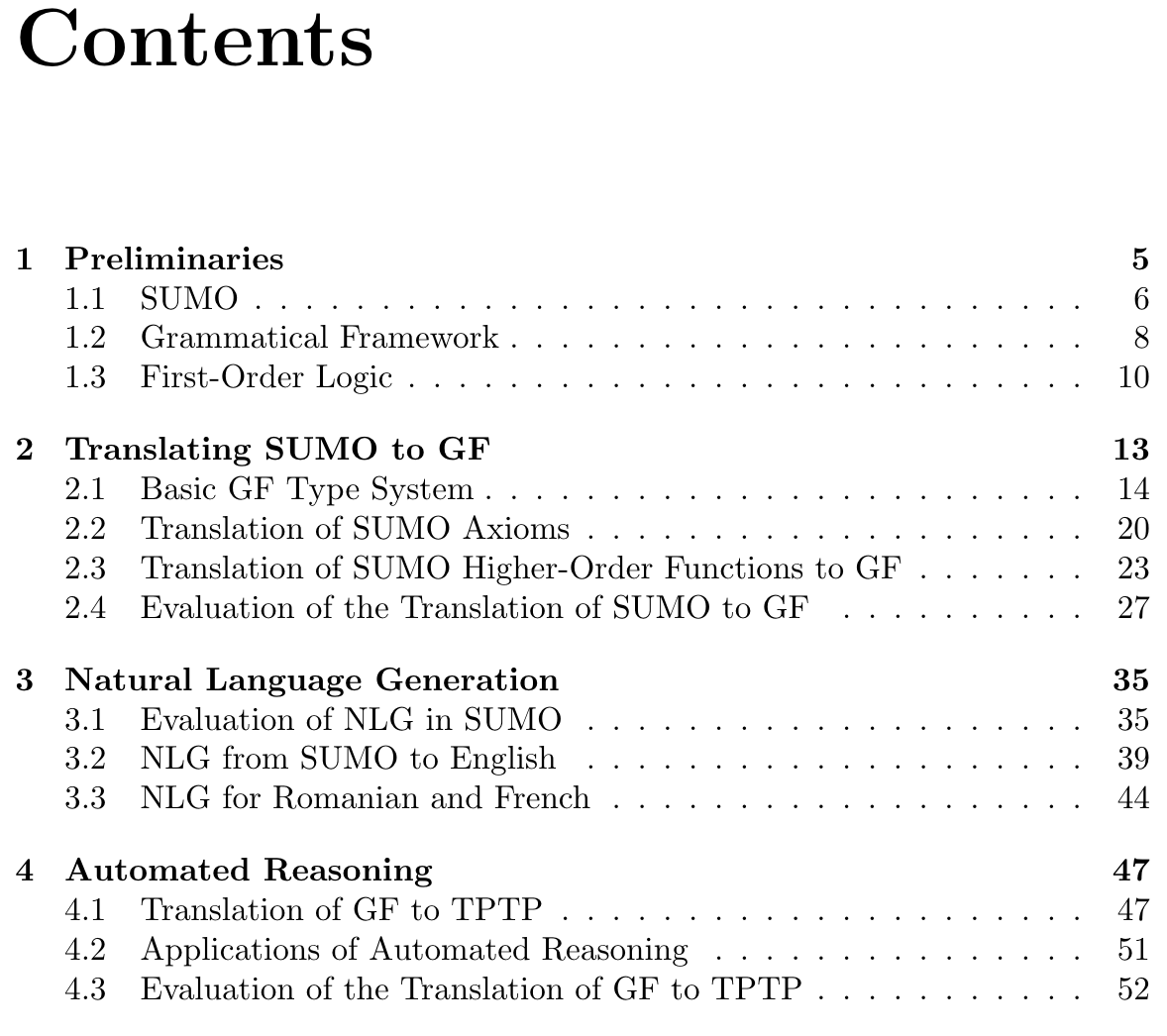 If you want a different introduction into dependent types in GF (with a similar focus on sentences that make sense), here’s the section in the tutorial.

If you want to learn about dependent types in more general-purpose programming languages, maybe pick up some Agda or Idris. If you’re already into Haskell, this tutorial might be more readable (it’s from 2014, I don’t know if the concrete details are still state of the art in Haskell). I heard recently about Ç, which is apparently implemented in Agda–that’s the only reason I can call Agda a “general-purpose programming language” with a straight face.