String, Int and Float literals in GF, part I

Here’s a simple grammar that parses expressions such as the following:

With the following concrete syntax in English:

Let’s break this down to smaller pieces.

Look at the abstract syntax. In cat, I have only defined Command, but in fun I’m using the types Int, String and Float. These types are built in GF, and you can see their specification in here.

They are present in all grammars, even if you don’t write them. If you type pg in your GF shell, you’d see something like the following: 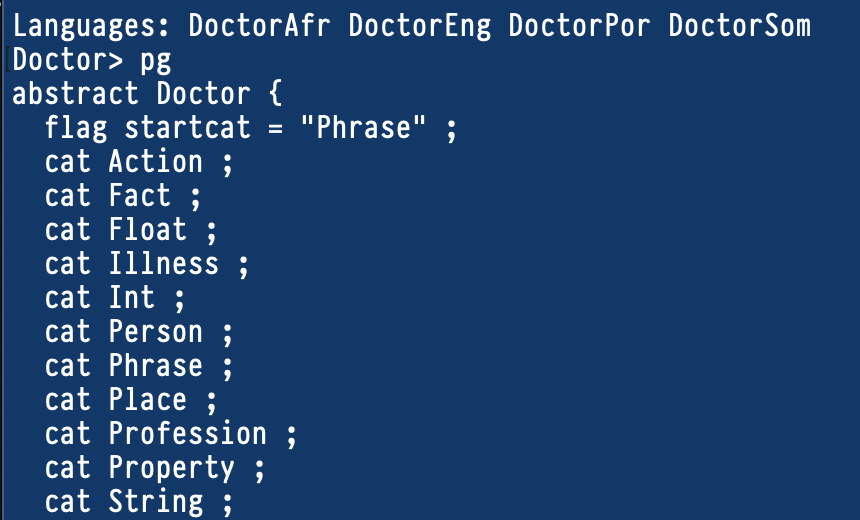 In order to become an object of a verb such as “call” or “measure”, the literal needs to be turned into a GF category like NP. The module Symbolic has an overloaded function symb, which does just that. Check out the link (and the new fancy version of RGL source browser!) to see the API.

In the grammar, I can simply use the function symb that turns an Int into an NP as follows:

(With the grammar I pasted, you get spaces the registration plate; use BIND to get rid of it.)

You can also linearise any tree you want to (up to integer overflow):

If you type gt in e.g. Foods grammar, you get a long and repetitive list of trees like “this very very very Italian wine is very Italian”, and at some point it stops, depending on the --depth parameter.

Generating trees with literals works differently. For both random and exhaustive generation in the GF shell, you only get one of each:

This happens in every category that uses literals, so here’s all that gt does for the whole grammar:

In the RGL synopsis, you see functions that take a Str as an argument. For instance, the Str -> Num instance of mkNum, which takes an argument like “35” (in digits) and returns “thirty-five” spelled out. Would it then be possible to transform a literal (Int, Float or String) using such a RGL function?

The answer is no.

It’s perfectly fine to use an oper like mkNum : Str -> Num when you’re constructing lexicon. By lexicon, I mean any functions (fun in the abstract syntax) that don’t take arguments. As long as the function creates some string from scratch, it can do anything it wants to that string: pattern match, split and concat other strings with +.

But all of these functions, like Call : Int -> Command, take an argument. When a function takes an argument, we can manipulate the argument (literal or not) in much more limited ways. So in this case, you may only take the literal’s string value unchanged—you can’t even look at it!—and construct a few limited categories out of it. That’s what symb does.

(For a longer explanation on when you can or cannot pattern match and glue tokens, see the gotchas post.)

Part II of this post describes how to use arbitrary strings and numbers in more advanced settings than just independent NPs (and whether that is a good idea to do).